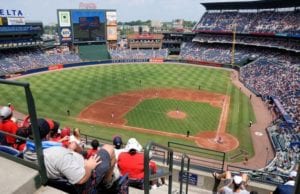 Major League Baseball (abbreviated MLB) is one of the three American sports. That said, players from all over the world play what some consider a kids’ game. With 30 teams, it is also the only one of the three top-level leagues that have teams in the US and Canada. If you can’t watch it on TV, you have the option of watching MLB.TV online to watch all of the action. By using a VPN you can watch in and out of market games from anywhere and avoid blackout restrictions.

There are a few things about the MLB.TV streaming service that you need to know. First off, it is a premium offering. You can get all of the games, providing they are out-of-market (or you use a VPN), for $82.99 for the year. If you want to follow a single team, it is $24.99 a month, providing the games are out-of-market and during the regular season. The reason you have to be outside of the market to watch some games is because of geo-blocks. The solution is to connect to a VPN server in another region.

Quickstart Guide for Using a VPN with MLB.TV

For the quickest and easiest way to watch the matches, follow these steps.

How to Watch MLB.TV with ExpressVPN

How to Watch MLB.TV with NordVPN

How to Watch MLB.TV with PIA VPN

That is all you have to do to enjoy the games online. As we mentioned, there are 30 teams and they are divided into the National League and the American League. This year, the regular season games start on March 29th, 2018 and finish up on September 30th, 2018. Unfortunately, a subscription to MLB.tv does not count if your team or teams make it to the postseason. Here is a look at the teams and their divisions.

With these great teams, it should be a great year. The postseason games begin on October 2nd with the potential for game 7 of the World Series on October 31st (if it goes to that point.

Geo-blocks can be annoying. Because of world licensing and broadcasting rights, the media companies block anyone outside of their targeted area. In other words, if you are traveling or want to watch region specific coverage, the blocking software will stop you. Since it can detect IP addresses, it can tell if you are outside of the area it wants you to be in. By connecting to a VPN, you can make the blocking software think you are located someplace else. Of course, you can watch more than just MLB.tv when you use one.

The truth of the matter is, the community is littered with ineffective VPN products. Though they may help you in other ways, you are removing one of the biggest benefits of a VPN if it does not unblock geo-restrictions. Even some of the more well-known providers do not work well to get you past those types of blocks. There is no point in trying to watch MLB.tv if you are traveling or you want to watch in-market games if you are having issues with the VPN.

Now, we have shown you some great tools you can use to unblock MLB.tv. Though there are others available, we think you’ll be happy with our choices. If you are a baseball fan, you should not have to miss out on the boys of summer because of where you are. If your goal is to unblock MLB.tv, you have come to the right place.