Unblock It All
Home Netflix ExpressVPN Netflix : How to Unblock Netflix with ExpressVPN 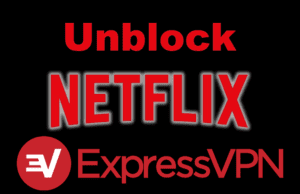 As you might already know, Netflix has taken steps to block VPN users from accessing their streaming service since 2016. In the years since then VPNs have been working on new ways to unblock access to Netflix. There are fewer and fewer VPNs that offer access to the most popular streaming services. Fortunately ExpressVPN still works with Netflix, BBC iPlayer, and more. You can watch movies and shows by connecting to an ExpressVPN server or by using their MediaStreamer (Smart DNS) service. We’ll walk you through the process. You will want to decide which Netflix content library you want to access with ExpressVPN. We tested the VPN in the US, UK, and Canada and found that it works great. You will not receive the dreaded proxy error “You seem to be using an unblocker or proxy. Please turn off any of these services and try again.” when using ExpressVPN. Simply use their VPN client of mobile apps to connect to a server in the United States to enjoy the largest Netflix library.

For the quickest and easiest way to watch Netflix with ExpressVPN, follow these steps.

Here are some more details on ExpressVPN along with a guide to help you get started.

How to Watch Netflix with ExpressVPN

Step by Step Guide to Watching Netflix from Abroad

The first step to access Netflix through ExpressVPN is to download one of their desktop or mobile apps. Since the VPN service unblocks Netflix just fine we’ll use the Windows client. If you ever have trouble access any site with their VPN network, you can also use the ExpressVPN MediaStreamer feature. It is a Smart DNS service available to all members. We prefer VPN for the mix of privacy protection and the ability to avoid geo-restrictions. Please consider that not all these server location will work for Netflix. Don’t panic if you receive a proxy error. Simply disconnect from ExpressVPN and try a difference server location. We successfully accessed Netflix while connected to ExpressVPN servers in Dallas and Washington, DC. We were also able to watch content in Canada and the United Kingdom by connecting to servers in Toronto and London (Docklands). Remember that Netflix is constantly trying to block VPNs so if you trouble go ahead and try other VPN server locations. If that fails you can use ExpressVPN MediaStreamer. Their tech support team is always there to help with 24/7 live chat support.

The truth of the matter is, the community is littered with ineffective VPN products. Though they may help you in other ways, you are removing one of the biggest benefits of a VPN if it does not unblock geo-restrictions. Even some of the more well-known providers do not work well to get you past those blocks. There is no point in trying to access the Netflix US Library if your VPN service won’t do its job. That is why we suggest using ExpressVPN.

We have just shown you some good ways to unblock Netflix from anywhere. Though there are other providers available, we think you’ll be happy with ExpressVPN. If you are a fan of some of the great Netflix content, you should not have to miss out on great options because of where you are located. You can also access other Netflix libraries by using these methods. If your goal is to unblock the Netflix website and enjoy the available content, you are in the right place.